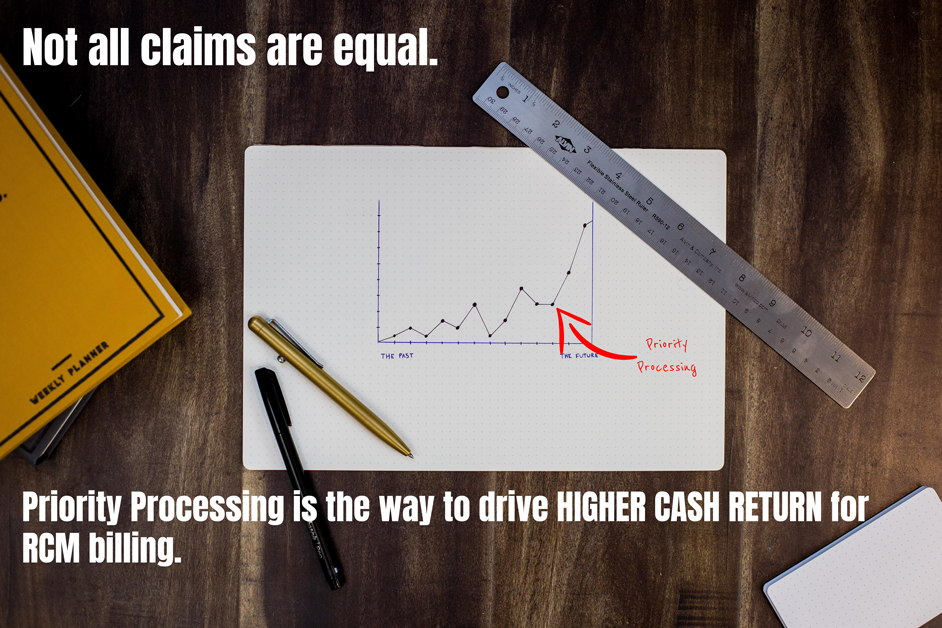 Treating all items of work equally is costing you money.

Did you know that the average RCM billing department loses a significant amount of money every month just because they aren’t getting to the work in time?

The RCM billing system has been largely unchanged since it started. A patient comes in, is treated and then the resultant work item is processed and hopefully the business gets paid.

This approach applies a level of equality to all claims which ignores the fact that not all claims are equal. From a commercial and profitability standpoint, does it make sense to apply the “first in – first out” principle to all claims? The fact of the matter is, some claims will actually cost you money to process and might not be worth your time.

You need to rethink what your goals are with your billing department – are you looking to process every item of work that comes through your doors no matter the cost? Or are you looking to improve cash flow and ultimately the profitability of the business?

If it’s the latter, then let me introduce you to “Priority Processing”.

Imagine I were to give you a stack of paper 10 feet high, where each individual page had a math problem on it. For every problem you solved, I would pay you $1 but you only had 8 hours to solve as many as you could.

Given every problem pays out the same amount, you might be thinking the order you process it in doesn’t matter. However, not all problems are equal, some are simple arithmetic and some are complex algebra – would your approach still be the same?

The smart approach would be to first assess the stack and pull out the easier problems to ensure you make the most of your 8 hours. However, the job of examining the pile doesn’t pay any money and is time consuming.

Back in the real world, this is the perfect job for software, so the first step of Priority Processing is to hand over the analysis to software and let it identify items of work that are most valuable to your organisation, based on the criteria that you and the industry define.

To make your job a bit easier, I’m going to give you that piece of software. Now that you have an order that will deliver the highest return it’s time to get cracking, right? Well, I’ve also decided to let five of your friends help you with the processing. So, you divide up the papers into equal stacks and get to work. That’s certainly an improvement, but 1 of your five friends is actually and algebraic genius! The stack of papers isn’t just all easy arithmetic problems and at some point you’ll run out of those, so it’s better to give the genius the problems that they’re best suited to work – this is a feature of Priority Processing called “modelling”, you just need to tell the software that you have a specialist in the team.

Now you’re in motion and picking up some speed. While the software is telling you which items of work should be done, it’s still up to you to fill your friends’ in-trays and that work soon becomes pretty tiring. It’s also stopping you from actually getting in and solving any problems yourself.
Once again, a perfect job for software. This step is called “delivering” and in the context of priority processing, software is used to deliver each person on your team the next item of work relevant to their skills and existing workload, automatically.

Let software do the heavy lifting

Feeling generous, I also give you the delivery software and at the end of the 8 hours you and your team have done a pretty good job and you’ve processed far more than you would have originally! But it doesn’t end there.

I’m going to give you another crack at the same task tomorrow, but I’m also going to give you a few hours to review your activity and make changes to your team. Within the context of Priority Processing, this step is called “Optimize” and, you guessed it, this is a job best done by software. In the real world, you don’t just have just have a day’s worth of data to review, you have years. The trends and learnings that you could pull from that data that could be returned to the delivery engine which would in turn massively improve your efficiency and cash-flow.

As you can see, in RCM, humans are far from redundant, but by using computer brains where they are best suited and then handing off to humans for areas best suited to them, you get massive efficiency improvements within your RCM billing department. This system is easy to implement and is a solution that works at scale.

For a demo of our system in action, fill out the form below: